Defining What is CBG?

By now, you’ve likely heard of CBD, or cannabidiol, which is the non-psychoactive cannabinoid naturally found in the cannabis plant.

The cannabinoid has become so popular, in America, analysts expect the market will hit a whopping $20 billion by the year 2024.

These days, you can find CBD in all kinds of consumer products, such as cosmetics, skin creams, and even CBD-infused beverages.

But one cannabinoid that may not be as popular is cannabigerol (CBG).

While tetrahydrocannabinol (THC) and CBD are the two most abundant cannabinoids in the cannabis plant and are also the most well-known, there are dozens of other cannabinoids in cannabis that are noteworthy, including CBG.

But what exactly is the CBG cannabinoid?

CBG – or cannabigerol – like CBD, is a non-psychoactive cannabinoid. It plays a key role in cannabis’ biochemistry and is present only in very low concentrations in the cannabis plant – usually no more than 1%.

CBG is the parent of other cannabinoids, including THC and CBD and it’s during the flowering phase of the plant’s growth cycle where CBG ends up converting into either THC or CBD.

Let’s go even further back in the chain of events. Cannabigerolic acid (CBGA) is the inactive form of CBG and is the precursor to the three main lines cannabinoid:

When CBGA is broken down by enzymes, it serves as the base molecule and is directed to one of the three lines.

Depending on which line is followed, either THC, CBD, or CBC can be formed.

CBG and the Endocannabinoid System

An increasing number of studies are being done on the cannabinoids of the cannabis plant.

Like CBD and THC, CBG’s effects on the body and mind have to do with its interaction with our body’s natural endocannabinoid system.

This system is chalked with CB receptors and tasked with maintaining homeostasis, or balance, in the body. When this balance is off, any number of issues and disease can ensue.

But when cannabinoids interact with the endocannabinoid system, balance – and therefore better health – can be restored.

The endocannabinoid system features a network of receptors all over the body, and naturally-occurring cannabinoids interact with these receptors, which themselves manage things such as pain, inflammation, mood, nausea, and so forth.

Introducing cannabinoids from external sources, such as cannabis, may have similar effects.

More specifically, it is the CB1 and CB2 receptors of the endocannabinoid system that are interacted with by CBG and other cannabinoids from the cannabis plant. 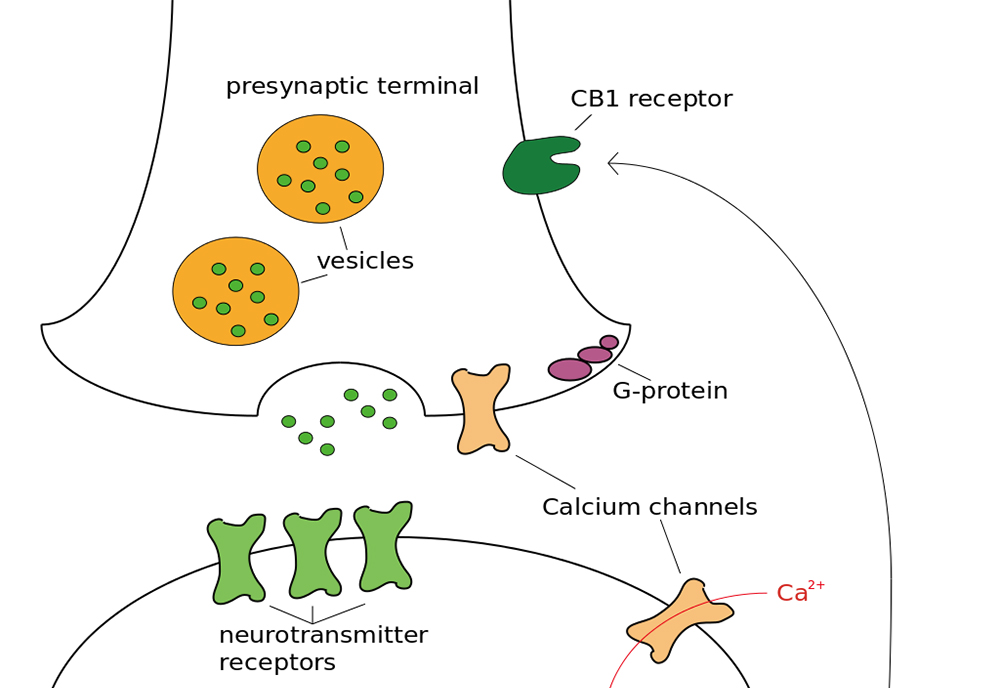 What Are CB1 and CB2 Receptors?

CB1 and CB2 receptors are important components of the endocannabinoid system (ECS). They are located all over the body on the surface of various types of cells in the body.

That said, even though both of these types of receptors are found throughout the body, CB1 receptors are more prevalent in the central nervous system, including in the brain and it’s these receptors that THC interacts with to induce a mind-altering effect.

CB2 receptors, on the other hand, are more abundant in other places, such as the immune system. Any binding or interacting with these receptors by cannabinoids does not cause any psychoactive effects.

Having said all that, both CB1 and CB2 receptors can be found all over the body. Further, there are other receptors types, though these receptors tend to be the two predominant ones.

Essentially, cannabinoid receptors pay attention to the conditions that are outside the cells of the mind and body.

They send off the information they gather about any change in environmental conditions to the cell that triggers the necessary response.

But, how is CBG different from CBD?

Well, when comparing the two, we find that their differences are very few alongside their similarities.

If anything, perhaps the two biggest differences between CBG and CBD (besides the fact that we have much more data on CBD) CBG is only found in trace amounts in cannabis plants after harvesting, drying and processing and interacts with our endocannabinoid system dissimilarly to CBD, providing its own unique benefits.

Unlike CBG, CBD doesn’t attach to CB1 or CB2 receptors, nor does it activate them. Instead, it interacts with the ECS by blocking the fatty acids (FAAH) which helps breaks down anandamide — an endocannabinoid that impacts our nervous system by attaching to  CB1 receptors.

As mentioned earlier, CBG is not as present in as high concentrations as other cannabinoids such as CBD or THC.

And while you will likely get a small amount of CBG from a full-spectrum strain of cannabis – which means you’ll get the full range of cannabinoids and other compounds in the plant – there are certain strains of cannabis that may have more CBG than others, such as the following:

It’s important to check out a product’s label and third-party lab results to determine exactly what cannabinoids are included in a strain and in what concentrations.

The findings on CBG are pretty promising for addressing a number of ailments.

What’s even more is the fact that it doesn’t produce any mind-altering effects, so you don’t have to worry about getting an altered state from consuming it.

Though it is not abundantly found in cannabis plants, this is a blessing in disguise for many people, as it has caused the acute focus of scientific researchers to discover more about its applications.

Watch this space for further info.